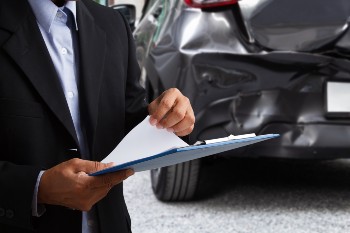 Whenever two or more vehicles are involved in a collision, the question of fault arises. If one motorist negligently causes the crash by violating traffic laws or operating recklessly, that motorist is liable for damages suffered by the other parties.

The victim(s) of the crash may file a claim for compensation with the at-fault driver’s insurance company. If that claim is denied or the insurer offers an unacceptably low settlement, the plaintiff may file a personal injury lawsuit and try to prove the defendant’s liability in court. Vehicle damage is just one type of evidence that may be used.

Liability is established by examining a variety of evidence in the crash:

Although vehicle damage itself is generally not conclusive proof of liability, it can be a factor in determining fault. Dents and scratches at the points of impact can tell an investigator or accident reconstructionist something about how the crash occurred.

If the passenger side of one vehicle is damaged, it was probably hit at a right angle by the other car, which might have run a red light or stop sign. It’s also possible, though, that the T-boned car’s driver did not have the right of way and might be fully or partially responsible for the accident.

If the car in front shows bumper, trunk, or tailgate damage from a vehicle that has struck it from behind, the driver of the rear car is generally at fault, but there could be exceptions.

If one vehicle shows evidence of impact to the front end and the other shows impact points on the right front, the wreck was probably caused by a driver who was turning left.

Major damage to the body of a vehicle is often the result of a crash caused by a speeding driver. Small dents to the car’s body can mean the at-fault motorist was braking but could not stop soon enough to avoid the wreck.

Dents and scratches on one side of each car usually indicate a sideswipe, and the location of the damage might indicate which vehicle struck the other.

An accident reconstructionist can utilize the principles of physics and engineering to find evidence of fault by determining the speed, direction, and final resting position of each car involved in a crash. The expert’s analysis might also include an examination of the vehicle’s various systems:

If you’re involved in an accident caused (partially or completely) by someone else, some steps you can take to gather evidence and protect your claim for damages are:

The Role of Your Attorney

An experienced car accident lawyer can utilize the evidence of damage to your vehicle to help establish liability for your crash and enable you to seek fair compensation. While you’re focused on recovering from injuries you’ve sustained in the wreck, your attorney can also take the following steps:

South Carolina follows a modified comparative fault model in personal injury cases. This means that you might be found partially liable for your own accident. In such a case, you may still collect compensation for your damages, and your award will be reduced according to your percentage of responsibility.

If, however, you are found to be 51% or more at fault for your crash, you are barred from collecting any compensation at all. This is another reason to have an experienced car accident lawyer on your side to present evidence proving you were less than half responsible for your wreck.

Have You Been Injured In A South Carolina Area Car Accident?