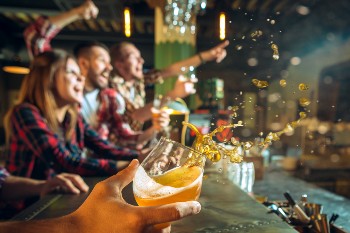 Across America each year, 10,000 people die in drunk driving accidents, and more than 500,000 are injured. South Carolina’s alcohol-related traffic fatality rate ranks above the U.S. average with 40% of the state’s traffic deaths caused by drunk drivers. Since 2010, nearly 4,000 people have died in alcohol-related crashes in our state.

The slowed reaction times, reduced vision, and poor judgment that result from alcohol consumption cause intoxicated drivers to:

These and other erratic driving habits lead to serious car crashes and severe injuries. A victim of an accident caused by someone else can generally file a claim against the at-fault driver’s insurance company for damages:

If, however, the negligent drunk driver who caused your wreck has only the minimum liability insurance coverage ($25,000) required by state law, that might not be enough to compensate you for your damages. What’s worse is that some car insurance policies specifically exclude damages caused by drunk driving from coverage. This is where dram shop liability comes in.

A dram is a unit of volume measurement that was historically used to serve alcohol, especially in the United Kingdom. An establishment that sold liquor was called a “dram shop.” For this reason, laws regulating the sale of alcohol are still called dram shop laws. Dram shop liability is the liability incurred by an individual, bar, restaurant, tavern, night club, liquor store, or convenience store that overserves an intoxicated person (or sells any alcohol to an underage person) who then drives drunk and causes an accident.

While South Carolina doesn’t actually have a dram shop statute, the state Supreme Court has consistently upheld dram shop liability claims on the basis of statutes regulating the state’s liquor license holders. An establishment with a liquor license may not legally serve alcoholic beverages to:

Any liquor license holder who does so can be held partially responsible for damages caused by the drunk or underage driver who was served, and bars in South Carolina are required to carry at least one million dollars worth of liability insurance to pay dram shop claims. This means you could receive compensation for your damages from both the drunk driver’s insurance company and from any establishment that served the driver alcohol on the day or night of your accident.

What You Have to Prove Regarding Your Dram Shop Liability Claim

The success of your dram shop liability claim depends on proving:

Of course, not all drunk drivers consume alcohol in bars. Often, they are drinking at private parties in someone’s home.

In South Carolina, a social host who provides alcohol to a guest who then drives drunk and causes an accident is liable for damages if the drunk driver was not of legal drinking age. If the intoxicated driver was over 21, however, the host cannot be held responsible.

Unlike workers in the hospitality industry, social hosts are not necessarily trained to recognize or gauge intoxication. Anyone, however, can ask a young person for proof of age.

In South Carolina, you generally have three years to file a lawsuit for a personal injury, which includes injuries suffered in a wreck with a drunk driver. There are, however, some exceptions to this deadline:

If you’re under 18 or legally insane at the time of the accident, the statute of limitations will “toll” or pause until you turn 18 or are no longer insane. You will then have one year to file a lawsuit against the at-fault driver and/or the establishment that served the driver alcohol.

If the at-fault drunk driver leaves South Carolina or simply disappears for more than one continuous year, that time will not be counted as part of the three-year filing period.

If you miss the filing deadline, it’s likely that your claim will be dismissed, and you’ll receive no compensation. An experienced attorney can be sure you comply with all deadlines and other requirements of the court.

The Role of A South Carolina Dram Shop Liability Attorney

Dram shop liability cases are complex. Filing claims against multiple defendants, negotiating with more than one insurance company, and possibly filing lawsuits against any or all of them are essentially impossible for the average person to do alone, especially when undergoing treatment for serious injuries. To prove the required liability, an attorney can:

If you've been injured in a car accident you should speak with a car accident lawyer as soon as possible. Contact us online or call our Charleston, South Carolina office directly at 843.488.2359 to schedule your consultation. We are also able to meet clients at our Conway, Florence, Myrtle Beach, Murrells Inlet, Mt. Pleasant, North Myrtle Beach or North Charleston office locations.