The National Highway Traffic Safety Administration (NHTSA) reports one-third of the six million car accidents across the U.S. each year are rear-end collisions, which cause nearly 2,000 traffic deaths annually. In South Carolina, more than 10,000 wrecks each year are caused by tailgating. 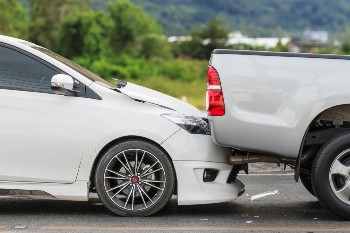 Although the vehicle damage sustained in rear-end accidents can be minor compared to that caused by head-on and T-bone crashes, injuries resulting from a rear-end crash can be severe:

Tendons and nerves in the neck are hyper-extended, damaging vertebrae, limiting neck movement, and causing headaches.

Bones in the knees, legs, hands, and arms can be broken when a driver/passenger hits the dashboard or steering wheel. Seat belts can also injure the pelvis or ribs.

Contact with the windshield/windows or other sharp objects in the car can result in facial cuts, scars, and eye injuries.

Concussions and traumatic brain injuries can occur if a victim’s head strikes a window, headrest, airbag, or steering wheel. Vision and cognitive function may be affected.

Rear impact can injure the spinal cord and cause damaged vertebrae, herniated discs, or paralysis.

Most rear-end accidents occur in high-traffic areas, especially where vehicles are traveling close together at high speeds. The reasons for rear-end crashes are numerous:

A driver changing lanes without checking mirrors/blind spots could cut in front of a car that might be unable to slow down in time to avoid a collision.

A car traveling over the speed limit or too fast for road conditions might not be able to slow down or stop in time to avoid a rear-end crash.

Following a car ahead too closely can result in a rear-end crash if that car slows down or stops suddenly.

The use of substances impairs a driver’s vision and slows reaction time.

If the car in the rear has bad brakes and/or the car ahead has no brake lights or tail lights, a rear-end crash is more likely to occur.

The driver of the car ahead feels a car behind is following too closely and taps the brakes to warn the driver behind to back off.

A driver might fail to notice a car ahead slowing down or stopping if the driver in the rear is:

In most cases, a driver who strikes a car ahead from the rear is presumed to be at fault in a rear-end collision. There are, however, exceptional cases in which the driver in front might be partially or completely responsible for the crash and the resulting injuries. The occupants of the car in the rear could be the victims in a rear-end crash if the car ahead:

The driver of each car has a duty to operate safely. If either driver breaches that duty and causes a rear-end wreck that injures the occupants of the other car, an injured victim is entitled to file a claim against the at-fault driver’s insurance company for damages:

If you’re an injured victim in the front car, the insurance company is likely to dispute your claim or offer you an unfairly low settlement, especially if your damages are major and your injuries severe. If you’re an injured occupant of the rear car, you might face a presumption of guilt and find your claim disputed or denied by the insurance company, which remains profitable by paying out as little money as possible in car accident claims.

The Role of Your Attorney

Whether you’re injured in the front or the rear car, the services of a rear-end car accident attorney are highly recommended to get you the compensation you deserve. Your lawyer will:

In some cases, the fault for a rear-end accident is shared among multiple drivers. Because South Carolina follows a comparative fault rule in personal injury cases, you may collect compensation for damages even if you’re partially at fault. Your award will simply be reduced according to your percentage of responsibility as long as it is no more than 50%. If, however, you are 51% or more responsible for the crash, you will collect nothing. To keep costs down, the insurance company will attempt to show you are more than half to blame for the wreck.