When an Insurance Company Denies Your Claim, an Attorney Can Help

After being hurt in a Myrtle Beach car accident that wasn’t your fault, you may think the responsible driver’s insurance company will have you covered. That’s a reasonable expectation, especially if you find yourself out of work during a hospital stay or experiencing other losses resulting from the collision. 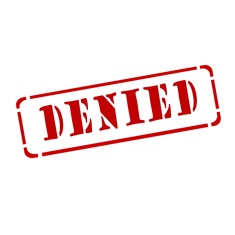 However, insurance companies don't always meet that expectation. Sometimes, they’ll deny your claim entirely. But our skilled South Carolina personal injury attorney can assist you in fighting for the compensation you deserve.

Whether you’re dealing with your own carrier or the company representing the at-fault party, it seems that an insurance company should be on your side and want to protect you when disaster strikes. The unpleasant truth is that an insurance adjuster’s job is to deny your claim or find a way to pay you as little as possible.
Insurance companies often seek to save money by finding any possible problem with your claim. Insurers only turn a profit if they bring in more money from premium payments than they pay out for claims, whether those claims are valid or not.
Here are a few reasons why an insurance provider may deny your Myrtle Beach accident claim:
● Claiming that your case lacks merit
● Disputing that fault for the accident actually lies with the other party
● Insisting you waited too long to seek medical assistance
● Citing a lack of medical evidence to prove your injury was caused by the accident
● Blaming injuries on a pre-existing condition
● Hoping you won’t have the endurance to pursue the claim for an extended period
Our experienced legal team is familiar with all of these tactics and may be able to help you if an insurance company has unfairly denied your claim.

Even if your claim isn’t denied outright, you still need a competent South Carolina attorney to ensure you get full and fair compensation. Here are just a few of the ways an insurance carrier might attempt to reduce your pay out:
● Trying to get you to accept a settlement before you realize the extent of your injuries, which allows the company to avoid paying additional money later if you require ongoing care or are out of work for an extended period
● Telling you it isn’t necessary to consult or hire an attorney, leaving you vulnerable to potentially unfair treatment
Additionally, an insurance carrier may try to wear you down with constant requests for information such as recorded statements—comments that can be used against you later. This stalling tactic is less effective if you have a Myrtle Beach lawyer handling your communication.
Having adequate legal representation is especially important when an insurance company attempts to pester you into signing an authorization to release all medical records. An attorney will negotiate the specific medical records that can be released to the insurance company, denying the release of any medical history outside the scope of your Myrtle Beach collision.
Our team can also work with your doctor to acquire missing or inaccurate documentation that may have resulted in the denial of the original claim. Having your injuries properly documented serves as compelling evidence to strengthen your case.
It's also important to know that insurance companies seeking to deny your claim may even engage in social media surveillance to dispute medical treatment as unnecessary or state you aren’t as injured as you claimed.
Don’t give the insurance companies any extra ammunition by:
● Advising you of the importance of complying with physical restrictions set by your doctor
● Warning against posting anything online about the accident or your injuries
● Advising that you keep images and videos of any physical labor off social media—even lifting a toddler for a group photo may be used against your claim
When you have an attorney handling communication, it forces an insurance company to take your claim seriously. An insurer is less likely to give a well-known local attorney the run-around, and that can result in fair treatment for you.

It’s possible that your claim may have been denied in “bad faith,” which requires the actions of an attorney to rectify. The South Carolina State Supreme Court decreed that a contract between an insurer and insurance holder has an implied covenant of good faith. Legally, that means an insurance carrier is required to act honestly and fairly with you after a Myrtle Beach accident. However, this may not always happen, and we can help. An insurer is acting in bad faith by:
● Threatening to rescind the policy, pay out less, or deny the claim entirely
● Misrepresenting facts or providing deceptive information about what a policy should cover
● Failing to reasonably and promptly investigate and settle claims
● Attempting to settle a claim for less than what is reasonably due